BATTLE CREEK, Mich., June 26, 2014 /PRNewswire/ -- Grammy Award-winning group, The Roots, did a surprise performance of the Kellogg's "Cereal and Milk" song at the Kellogg's Recharge Bar yesterday in New York City. The group celebrated breakfast by performing with milk and cereal inspired instruments, including bowls, spoons and milk jugs and were joined by eight young musicians from their high school, the Philadelphia High School for the Creative and Performing Arts. 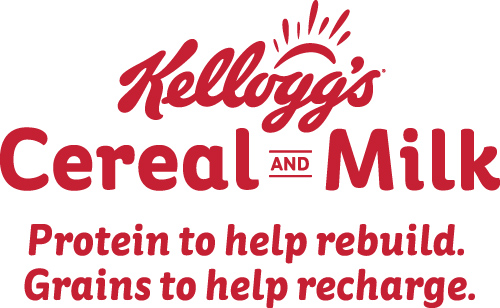 To learn more about how a serving of cereal and one cup of skim milk offers a tasty combination of protein and grains that helps recharge your body, visit Kelloggs.com/CerealAndMilk.

At Kellogg Company (NYSE: K), we are driven to enrich and delight the world through foods and brands that matter. With 2013 sales of $14.8 billion and more than 1,600 foods, Kellogg is the world's leading cereal company; second largest producer of cookies, crackers and savory snacks; and a leading North American frozen foods company. Our brands – Kellogg's®, Keebler®, Special K®, Pringles®, Kellogg's Frosted Flakes®, Pop-Tarts®, Kellogg's Corn Flakes®, Rice Krispies®, Kashi®, Cheez-It®, Eggo®, Mini-Wheats® and more – nourish families so they can flourish and thrive. Through our Breakfasts for Better Days® initiative,  we're providing 1 billion servings of cereal and snacks – more than half of which are breakfasts – to children and families in need around the world by the end of 2016. To learn more about Kellogg, visit www.kelloggcompany.com or follow us on Twitter @KelloggCompany.

Formed in 1987, in Philadelphia, PA, the legendary Roots Crew, consists of Black Thought (MC), Ahmir "Questlove" Thompson (drums), Kamal Gray (electronic keyboards), F. Knuckles (percussion), Captain Kirk Douglas (electronic guitar), Damon Bryson (sousaphone) and James Poyser (electronic keyboard). Having previously released twelve projects, The Roots have become one of the best known and most respected hip-hop acts in the business, winning four Grammys, including "Best R&B Album" for Wake Up!, "Best Traditional R&B Vocal Performance" for "Hang in There" (with John Legend) and "Best Group or Duo R&B Vocal Performance" for "Shine." The ensemble was most recently nominated for "Best Rap Album" for the 2011 release of undun. This brings the band's GRAMMY nomination count to twelve. Additionally, The Roots have also become the faces of Philly's "Fourth of July Jam," an annual concert held during the Fourth of July with the biggest names in music, and "The Roots Picnic," a yearly star-studded mix of musicians, that has become a celebrated institution during awards season. Recently The Roots were named one of the greatest live bands around by Rolling Stone and became the official house band on The Tonight Show starring Jimmy Fallon where they currently perform every Monday- Friday.