Jimmy Butler, Simone Biles And Kellogg's® Show Off Their Trick Shots To Help Fight Childhood Hunger
All-stars team up with No Kid Hungry to raises awareness and funds for children in need

BATTLE CREEK, Mich., March 3, 2017 /PRNewswire/ -- No child should ever have to go to school hungry, yet one in five kids in America isn't getting the food they need. 1 That's why Kellogg's® is committed to helping kids start their day right, with breakfast.  In the lead up to National School Breakfast week (March 6-10) and National Cereal Day (March 7), Kellogg's and No Kid Hungry are teaming up with U.S. Olympic gold medalists Jimmy Butler of the Chicago Bulls and Simone Biles to help kids start their mornings right.

On March 3 in Chicago, Butler and Tony the Tiger will participate in a "Buckets for Breakfast" event that encourages local students to show off their trick shots on the court while raising awareness for childhood hunger. On the same day, approximately 1,000 miles away, Biles will host a similar event in her hometown of Houston, with local students. Kellogg's will donate $5,000 to the local Chicago and Houston school participating at the events.

Butler and Biles have more in common than just Olympic gold medals and Team Kellogg's—they're also both from the Houston area. Recently, the percentage of food-insecure children in Houston has grown from 24.7 percent in 2015 to 26 percent in 2016. 2 And Butler's current home of Chicago is in one of the top five counties in the nation with 100,000 or more children facing food insecurity. 3

"I'm proud to be partnering with Kellogg's for the third year in a row to raise awareness about such an important cause that is close to my heart. Together we can all team up to defeat childhood hunger," Butler said.

Families can join Butler and Biles by sharing videos of their favorite trick shot using #BucketsForBreakfast on social media. Whether it's a slam dunk or banking your socks off the dresser and into the laundry basket, everyone can get involved to show their support for ending childhood hunger.

As part of this year's program, Kellogg's will donate one percent of sales for every specially marked box of Kellogg's cereal sold in 2017. 4

Kellogg's invites families to learn more about how they can get directly involved in the fight against childhood hunger at nokidhungry.com/kellogg and Kelloggs.com/give.

About Jimmy Butler
Jimmy Butler is a forward with the Chicago Bulls.  This five-year NBA veteran has established himself as a superstar on the court, averaging a team-high 37 minutes and 24.5 points per game, and recently named a starter in the 2017 NBA All-Star game.  In 2015 Jimmy received the NBA Most Improved Player Award and was named to the All-NBA Defensive Second Team for the second year in a row (2014, 2015). On January 3, 2016, Jimmy set a Bulls franchise record for most points scored in a half with 40 in a win over the Toronto Raptors. Off the court, Jimmy volunteers his time to troubled youth and underserved families in both Chicago and in his hometown of Tomball, Texas.  Butler is a country music fan and his favorite artists include Lee Brice, Tyler Farr, Luke Bryan and Florida Georgia Line. Butler played college basketball at Marquette University and was selected 30th overall by the Chicago Bulls in the 2011 NBA Draft.

About Simone Biles
Simone Biles is the most decorated female gymnast in history, with 5 Olympic medals and 14 World Championship medals. She was the first female gymnast to win three consecutive World All-Around titles and has been undefeated in the all-around competition since 2013. Since the 2016 Rio Olympic Games Simone has been recognized as the AP Female Athlete of the Year, Laureus World Sportswoman of the Year, counted among Forbes 30 under 30 list, became the youngest person ever named to TIME magazine's Person of the Year finalist list and published a NY Times Best Seller, Courage to Soar.

About No Kid Hungry
No child should go hungry in America, but 1 in 5 kids will face hunger this year. Using proven, practical solutions, No Kid Hungry is ending childhood hunger today by ensuring that kids start the day with a nutritious breakfast, are able to get the nutrition they need during the summertime, and families learn the skills they need to shop and cook on a budget. When we all work together, we can make sure kids get the healthy food they need. No Kid Hungry is a campaign of national anti-hunger organization Share Our Strength. Join us at NoKidHungry.org.

1 No Kid Hungry. Hunger Facts, 2017.
2 Houston Food Bank. Hunger/Food Insecurity, 2016.
3 United States Census Bureau. QuickFacts Chicago, Illinois, 2015.
4 In 2017, for every specially marked box sold, Kellogg will donate 1% of sales, up to one million dollars based on Nielsen average price, to No Kid Hungry for the expansion of school breakfast programs. 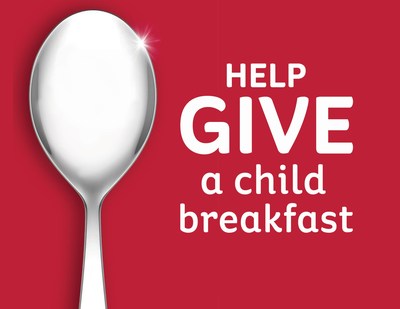