Pringles® Pops Into New York, Giving Fans A Taste Of Flavor Stacking
The Pringles Stack Shack is the ultimate pop-up experience. Pringles is taking its iconic stacked crisps and providing layers of flavor fun - for a limited time only.

BATTLE CREEK, Mich., Oct. 18, 2017 /PRNewswire/ -- This October, Pringles® is taking its iconic crisps to new extremes with a New York pop-up dedicated to flavor stacking – a new delicious way to experience your favorite Pringles crisps. For three-days only, from Wednesday, Oct. 18 to Friday, Oct. 20, the Pringles Stack Shack will give fans the chance to create new mind-blowing flavor stack combinations, or recreate favorite dishes in crisp form – a Pringles experience like never before. 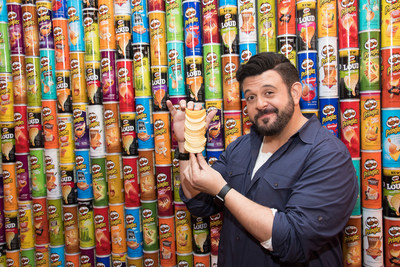 "Fans are already familiar with Pringles' wide variety of flavors, but we want to show them how stacking their favorite Pringles flavors can 'wow' their taste buds in a whole new way," said Kurt Simon, senior director of marketing for Pringles. "The Pringles Stack Shack encourages everyone to unleash their creativity and flavor stack to their heart's content."

Flavor stacking might be new to some, so Pringles has enlisted the help of New Yorker Adam Richman – TV personality, culinary traveler and author – to show visitors how to stack Pringles crisps like a pro. Come experience the Pringles Stack Shack with Adam Richman at the grand opening on Oct. 18.

"I'm excited to be partnering with Pringles to help people discover the endless possibilities of flavor stacking using these snackable crisps," said Adam Richman. "In my opinion, flavor is king and nobody does flavor like Pringles. I'm unveiling my custom flavor stacks at the Pringles Stack Shack today, so be sure to stop by and try them for yourself!"

Located in Times Square on the corner of 41st Street and Broadway at 1450 North Broadway, the Pringles Stack Shack will allow fans to recreate classic and unique dishes in crisp form, as well as their own individual flavor combinations. The only limit to the flavors they can create is their imagination.

About Adam Richman
Adam Richman, TV personality, culinary traveler, cook and author, was born and raised in Brooklyn, New York. With the diverse culinary mecca of New York City at his fingertips, Adam's love affair with and intense interest in food and food culture developed at an early age. Though originally he was most widely known as the host of Travel Channel's "Man V. Food," Adam's resume has since expanded to include host and co-executive producer of five titles across Travel Channel ("Man V. Food Nation," "Adam Richman's Best Sandwich in America," "Fandemonium," "Carnivore Chronicles" and "Secret Eats") and host of NBC's "Food Fighters." In addition to being a frequent contributor to NBC's "The TODAY Show," he is also an author of two books (America the Edible, Straight up Tasty) and his production company, County of Kings, co-created and co-executive produced "BBQ Champ," a wildly popular competition series, for ITV in the UK. A Yale graduate, Adam speaks four languages and has traveled the globe – visiting 13 countries alone for season two of "Secret Eats with Adam Richman" – on his quest to highlight local food culture on a national stage and uncover the world's hidden edible treasures.