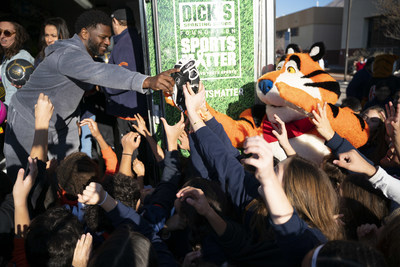 The first-of-its-kind partnership between one of America's favorite breakfast cereals and the foundation for America's largest sporting goods retailer might seem unlikely, but both are on a mission to help Mission Tiger ‖ Sports Matter Mobile save school sports. And today's efforts align with the Sun Bowl's 1935 inaugural mission to benefit underprivileged children.

In partnership with The DICK'S Foundation, Tony the Tiger called on his friend, Sun Bowl alum and football Hall of Famer LaDainian Tomlinson to break the news. Tomlinson and Tony drove around town to deliver much-needed sporting goods equipment to aspiring young athletes at Wiggs Middle School.

The collaboration is the latest stop for Mission Tiger, an initiative from Kellogg's Frosted Flakes to save middle school sports nationwide. For months, Tony's been planning to bring Mission Tiger, which raises awareness and helps fund at-risk middle school sports programs through a multiyear partnership from nonprofit DonorsChoose, to the Tony the Tiger™ Sun Bowl, but he couldn't do it alone. Given the considerable goal to give every middle school kid in El Paso a chance to play, Tony called on The DICK'S Foundation to help make this stop on his mission a reality.

"At DICK'S we believe that sports make people better and we are committed to supporting all youth athletes in need through our Sports Matter program," said Aimee Watters, executive director of The DICK'S Sporting Goods Foundation. "We're proud to partner with Mission Tiger to help provide the much-needed funding and solutions to the communities we serve, especially here in El Paso."

In August 2019, Kellogg's Frosted Flakes was announced as the title sponsor of the newly named Tony the Tiger™ Sun Bowl, making Tony the Tiger the first mascot to ever lend his name to a college football bowl game.

"El Paso is a city that's touched all of our hearts this year for many reasons, so along with DICK'S Sporting Goods Foundation, we couldn't be happier than to make this incredible impact," said Brant Wheaton, marketing director of Kellogg U.S. ready-to-eat cereal segment. "Sports are vital to teaching leadership, teamwork and confidence in kids, and that's why Mission Tiger and Sports Matter are essential in filling the funding gaps for middle school athletic programs across the country."

A HALL OF FAME TEAM
Football Hall of Famer LaDainian Tomlinson is the latest to join Mission Tiger alongside other athlete superstars. Tomlinson, a Texas native and alum of the Sun Bowl, believes in what DSGF and Mission Tiger are doing to further the importance of middle school sports and give more kids access.

"I want every kid to have the chance to play sports just like I did," said Tomlinson. "Sports open countless doors and teach kids valuable lessons about teamwork and leadership that will impact the rest of their lives. I'm proud to team up with Mission Tiger and The DICK'S Sporting Goods Foundation to give kids in my home state a chance to reap the true benefits that middle school sports bring."

Since Mission Tiger launched in August 2019, the program has helped more than 213,000 kids nationwide receive better access to sports by funding middle school sports programs in need. Since 2014, DICK'S and The DICK'S Foundation have pledged more than $100 million to support youth sports teams and leagues in need and helped more than 1 million young athletes across the country play sports. The Sports Matter program strives to increase awareness for the growing issue of underfunded youth athletics nationwide and provide much-needed support through equipment, uniform and monetary donations.

ABOUT KELLOGG'S FROSTED FLAKES® MISSION TIGER™
Mission Tiger launched in August with a $1 million dollar commitment to DonorsChoose, a nonprofit organization dedicated to supporting public schools nationwide. For every Kellogg's Frosted Flakes® box purchased, a $1 donation* is sparked by uploading a receipt to Kellogg's Family Rewards™ via MissionTiger.com. Thanks to fans coast to coast, middle schools like those in El Paso have better access to play sports. Whether a favorite athletic program has been cut or a local team needs new uniforms, visit MissionTiger.com today. There fans can see requests from middle schools seeking funds and join our team. Mission Tiger middle school sports projects are fulfilled by Tony's partner, DonorsChoose. *Kellogg is donating $1 per purchase to DonorsChoose.org with Kellogg's Frosted Flakes® receipt upload. Minimum donation $500,000; maximum donation $1,000,000. Go to MissionTiger.com for instructions. Applies to purchases between 8/5/19 and 8/5/20; must upload within 30 days of purchase.

About Kellogg Company
At Kellogg Company (NYSE: K), we strive to enrich and delight the world through foods and brands that matter. Our beloved brands include Pringles®, Cheez-It®, Special K®, Kellogg's Frosted Flakes®, Pop-Tarts®, Kellogg's Corn Flakes®, Rice Krispies®, Eggo®, Mini-Wheats®, Kashi®, RXBAR® and more. Net sales in 2018 were approximately $13.5 billion, comprised principally of snacks and convenience foods like cereal and frozen foods. Kellogg brands are beloved in markets around the world. We are also a company with Heart & Soul, committed to creating Better Days for 3 billion people by the end of 2030 through our Kellogg's® Better Days global purpose platform. Visit www.KelloggCompany.com or www.OpenforBreakfast.com.

About DonorsChoose
DonorsChoose is the leading way to give to public schools. Since 2000, more than 4 million people and partners have contributed $900 million to support 1.5 million teacher requests for classroom resources and experiences. As the most trusted crowdfunding platform for teachers, donors, and district administrators alike, DonorsChoose vets each request, ships the funded resources directly to the classroom, and provides thank yous and reporting to donors and school leaders. Charity Navigator and GuideStar have awarded DonorsChoose, a 501(c)3 nonprofit, their highest ratings for transparency and accountability. For more information, visit www.donorschoose.org.