BATTLE CREEK, Mich., Jan. 28, 2020 /PRNewswire/ -- Through a partnership with Adult Swim's animated pop culture phenomenon, Rick and Morty, this year's Pringles ad goes where no Big Game ad has gone before. In case you missed it, fans were given a SNEAK PEEK via the Adult Swim social channels, and now you can check out the full ad HERE. 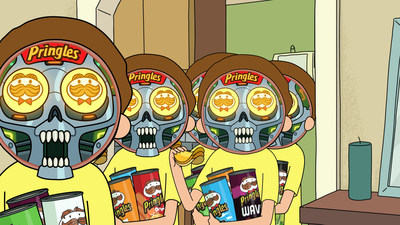 In its third season, Rick and Morty was rated the #1 comedy across all of television with young adults. With a devoted fanbase reaching nearly 50MM viewers, Rick and Morty follows the adventures of an eccentric scientist, Rick, and his grandson, Morty, as they travel to infinite and different dimensions. Similarly, Flavor Stacking pushes fans to find new, creative ways to enjoy their favorite Pringles crisps, unlocking endless dimensions of flavor. After two years of budding popularity, the Flavor Stacking craze goes to the next level with Rick and Morty.

Rick, Morty and his sister Summer star in the dystopian Pringles Flavor Stacking spot, featuring the first-ever animated Pringles flavor stack. A Pringles robot—disguised as Morty—appears overly enthusiastic about the Spicy Barbecue Pizza stack, made using Pringles Pizza, Barbeque and Jalapeno crisps. Rick immediately catches on to his grandson's bizarrely out-of-character corporate jargon, unmasks the Mortybot and comes to the startling realization that they're trapped inside a Pringles commercial.

"With alternate universes taking a front seat in pop culture with television and movies, we love how ahead of trend Dan Harmon and Justin Roiland were when developing the concept for the show," said Gareth Maguire, senior director of marketing for Pringles. "The Pringles brand aims to do the same with flavor development and product innovations. As a result, when identifying a partner for our ad campaign this year, their forward-thinking attitude combined with the show's popularity and younger audience made this partnership a natural fit."

"Rick and Morty is the biggest comedy show around, so of course we were extremely excited about their first trip to the Big Game," said Jill King, senior vice president, marketing and partnerships, Adult Swim. "With Pringles' fun personality and devoted audience, there's no better partner for Rick and Morty's big debut. There are a lot of Rick and Morty fans out there, and they're all going to go crazy when they see it, but it's going to be so fun sharing it with an even wider audience, who we are confident will love it too!"

The 30-second spot is created by Adult Swim in partnership with Grey Group and will air during the second quarter of the game. The ad will be supported by a fully integrated marketing campaign including PR, digital, social media, e-commerce and a special, Pringles Pickle Rick edition that fans can find on store shelves beginning in early February. For more information, follow @Pringles on Instagram, Twitter and check out Facebook.com/Pringles.

At Kellogg Company (NYSE: K), we strive to enrich and delight the world through foods and brands that matter. Our beloved brands include Pringles®, Cheez-It®, Special K®, Kellogg's Frosted Flakes®, Pop-Tarts®, Kellogg's Corn Flakes®, Rice Krispies®, Eggo®, Mini-Wheats®, Kashi®, RXBAR®, MorningStar Farms® and more. Net sales in 2018 were approximately $13.5 billion, comprised principally of snacks and convenience foods like cereal and frozen foods. Kellogg brands are beloved in markets around the world. We are also a company with Heart & Soul, committed to creating Better Days for 3 billion people by the end of 2030 through our Kellogg's® Better Days global purpose platform. Visit www.KelloggCompany.com or www.OpenforBreakfast.com. 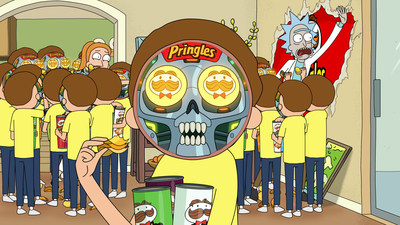