BATTLE CREEK, Mich., Aug. 15, 2022 /PRNewswire/ -- Kellogg's Frosted Flakes® and Tony the Tiger® are leveling up the fun for cereal fans and gamers with their first-of-its-kind collaboration with Twitch's Brand Partnership Studio. Tony will make his streaming debut — making Kellogg's Frosted Flakes the first brand globally to work with Twitch, to transform a brand mascot into an interactive VTuber — in Tony the Tiger's GR-R-REAT CEREAL BOWL OF GR-R-REATNESS livestreamed event. 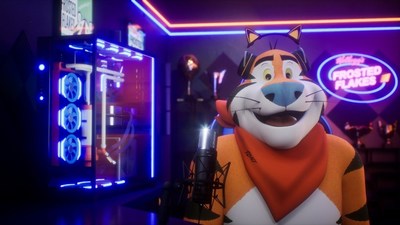 Tony the Tiger's Cereal Bowl is the perfect opportunity for deeper engagement with fans on Twitch. During the 2-hour livestream, fans can join in the fun by participating in Kellogg's Frosted Flakes-fueled polls and chiming in on Chat. Tony will also unveil his custom Kellogg's Frosted Flakes gaming rig, complete with a milk-coolant PC keeping everything running smoothly.

"Bringing an iconic mascot like Tony the Tiger to our service is an exciting first for our Brand Partnership Studio," said Adam Harris, Global Head of Twitch's Brand Partnership Studio. "This innovative concept taps into the growing popularity of VTubing on Twitch, where we saw VTubing content increase 467% YoY last year. Together with Kellogg's Frosted Flakes, we're producing a made-for-the-Twitch community live experience that introduces a beloved character to well-known Twitch streamers, fosters a healthy dose of competition, and encourages viewers to interact with Tony the Tiger in real-time in Chat."

Tony the Tiger isn't a stranger to trying something new and engaging with fresh audiences. After a surprise late-night show appearance, hanging with star athletes and recently joining TikTok, he's ready to interact with the Twitch community as he continues to make waves in 2022, the Year of the Tiger.

About Kellogg Company
At Kellogg Company (NYSE: K), our vision is a good and just world where people are not just fed but fulfilled. We are creating better days and a place at the table for everyone through our trusted food brands. Our beloved brands include Pringles®, Cheez-It®, Special K®, Kellogg's Frosted Flakes®, Pop-Tarts®, Kellogg's Corn Flakes®, Rice Krispies®, Eggo®, Mini-Wheats®, Kashi®, RXBAR®, MorningStar Farms® and more. Net sales in 2021 were nearly $14.2 billion, comprised principally of snacks as well as convenience foods like cereal, frozen foods, and noodles. As part of our Kellogg's® Better Days ESG strategy, we're addressing the interconnected issues of wellbeing, climate and food security, creating Better Days for 3 billion people by the end of 2030. Visit www.KelloggCompany.com.

About Twitch Interactive
Launched in 2011, Twitch is an interactive livestreaming service and global community that comes together every day to create unique, live, and unpredictable experiences from the interactions of millions. It brings the joy of co-op to everything, from casual gaming and world-class esports to anime marathons, music, and art streams. Twitch also hosts TwitchCon, the biggest community event of the year, where tens of thousands of people come together to celebrate and connect with others who share their interests and passions. We're always live at Twitch. Stay up to date on all things Twitch on Twitter and on our Blog.