BATTLE CREEK, Mich., Dec. 27, 2022 /PRNewswire/ -- College football season just got a lot cheezier as Cheez-It® has officially inked its first-ever name, image and likeness (NIL) deals with college football athletes from four storied programs, giving them the opportunity to wake up "Feelin' the Cheeziest" in the exclusive Cheez-It "Feelin' the Cheeziest" Hotel Rooms. 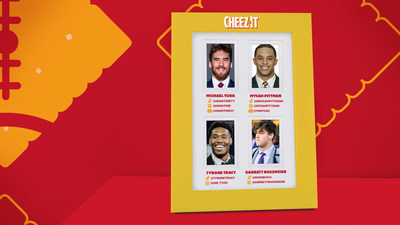 Each player scored some competitive contract perks, with their hotel rooms decked out in floor-to-ceiling Cheez-It-inspired items, like absurdly plush Cheez-It rugs, an "I woke up 'Feelin' the Cheeziest, Coach!" alarm clock, inspirational Cheez-It-inspired artwork and luxurious red and yellow bedding. It's like waking up inside of a Cheez-It box, but better.

"As a brand who has continuously offered fans show-stopping experiences, we're excited to bring the action directly to four extremely talented college football athletes," said Erin Storm, brand senior director for Cheez-It. "We can't wait for Pittman, Turk, Nussmeier and Tracy Jr. to experience the magic of our 'Feelin' the Cheeziest' Hotel Rooms."

Last month, the brand announced fans will also have the chance to wake up in Cheez-It paradise – just like their favorite bowl game athletes – with the Cheez-It "Feelin' the Cheeziest" On-Field Suites. Fans who attend the official Cheez-It Bowl pep rallies on Dec. 28 at Pointe Orlando will have the chance to spend the night before the 2022 Cheez-It Bowl at Camping World Stadium, and then watch the game from the on-field suites. For official rules, click here (no purchase necessary).

Whether it be the Cheez-It Bowl, Cheez-It Citrus Bowl or any bowl game, Cheez-It offers a cheezy, crunchy satisfaction that is guaranteed to be a crowd pleaser and an essential part of any game day celebration. Don't forget to follow @CheezIt on Instagram, Facebook, Twitter and TikTok, as well as @CheezItBowl, @CitrusBowl and each selected player on your favorite social media platform to catch all the absurdly satisfying antics and get ready to feel the cheeziest!

At Kellogg Company (NYSE: K), our vision is a good and just world where people are not just fed but fulfilled. We are creating better days and a place at the table for everyone through our trusted food brands. Our beloved brands include Pringles®, Cheez-It®, Special K®, Kellogg's Frosted Flakes®, Pop-Tarts®, Kellogg's Corn Flakes®, Rice Krispies®, Eggo®, Mini-Wheats®, Kashi®, RXBAR®, MorningStar Farms® and more. Net sales in 2021 were nearly $14.2 billion, comprised principally of snacks as well as convenience foods like cereal, frozen foods, and noodles. As part of our Kellogg's® Better Days ESG strategy, we're addressing the interconnected issues of wellbeing, climate and food security, creating Better Days for 3 billion people by the end of 2030. Visit www.KelloggCompany.com.